When a veteran has a disease or injury related to service, he or she may file a claim for disability compensation for the service-connected disease or injury. These claims are filed with the Department of Veterans Affairs (VA) and can result in a grant, partial grant, or denial. If a veteran is unsatisfied with the outcome of his or her claim, he or she may file an appeal. Since 1996, the appeal rate has averaged 11 to 12 percent of all claims decisions.

Between FY 2010 and FY 2015, the Veterans Benefits Administration (VBA) completed more than 1 million claims annually, with nearly 1.4 million claims completed in FY 2015. As VA has increased claims decision output over the past 5 years, appeals volume has grown proportionately. Today, there are more than 450,000 pending appeals, and this number is expected to grow to 1 million by 2025 without legislative reform.

The current IT system used to track and process appeals at the Board of Veterans’ Appeals and across the VA is more than 20 years old and is built on outdated infrastructure. It powers a variety of workflows essential to the appeals process across VA, but is difficult to use and hard to update, and it is straining under the increased volume of appeals. With such a large volume of paperless cases that travel across jurisdictions within the VA, from the local regional office level to the Board and back again, the VA needed an updated IT solution to ensure full and seamless accountability of all appeals as well as data integrity through integration of systems, increased automation, and reduced manual processes. VA recognized that the processes and technology underpinning the appeals system needed improvements, and began the Appeals Modernization initiative in 2014. 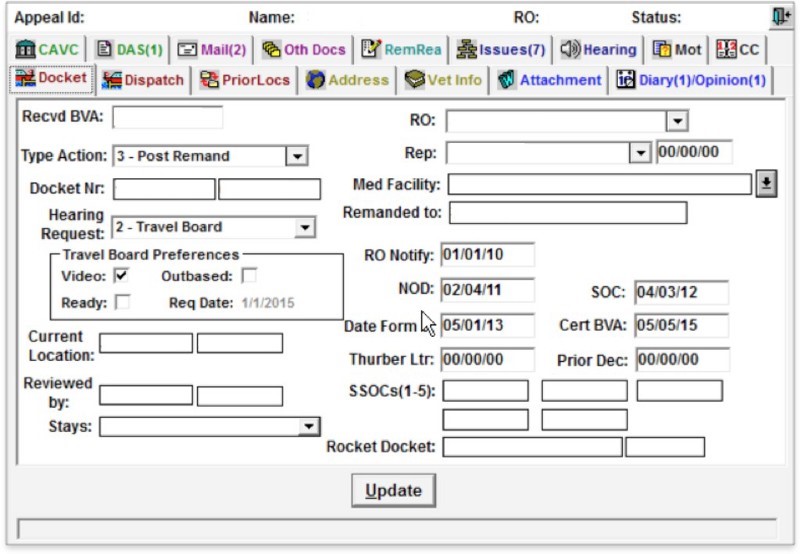 The U.S. Digital Service at VA (DSVA) – the U.S. Digital Service’s first agency digital service team – has worked closely with the Board of Veterans’ Appeals to develop a new system that tracks and processes paperless appeals, called Caseflow. This system will have many user-facing web applications that map to existing workflows in the appeals process such as Certification, Activation, Review, and Dispatch. The team is using an iterative approach that will gradually replace small portions of the older system as new components are created, minimizing any disruption to existing business processes. In addition, the USDS modular approach enables quick updates and changes to Caseflow should there be any changes in legislation, regulation, or VA policy.

Caseflow Certification, released nationwide in April 2016, is the first component of the modernized system to be deployed. Caseflow Certification is a tool for VA employees to ensure that the Board has all of the information it needs to process the appeal, and that the data in the claims system — known as the Veterans Benefits Management System (VBMS) — matches the data in the appeals system, known as the Veteran Appeals Control and Locator System (VACOLS). Because many appeals that arrived at the Board contained manual data errors or were incomplete, providing VA employees at regional offices better tools to verify and reconcile key information using automated steps has been critical to optimizing accuracy and efficiency, and ensuring data integrity through system integration. Caseflow Certification also provides a simplified way for staff to generate a VA Form 8 – the Certification of Appeal – which is a required step in the appeal process. The tool automatically populates many fields of this form based on data in the system, reducing manual data entry to just a handful of questions. It also allows staff to file the form in the claims system with a single click, rather than requiring users to switch browser windows, navigate to the veteran’s case folder, and manually upload the form. 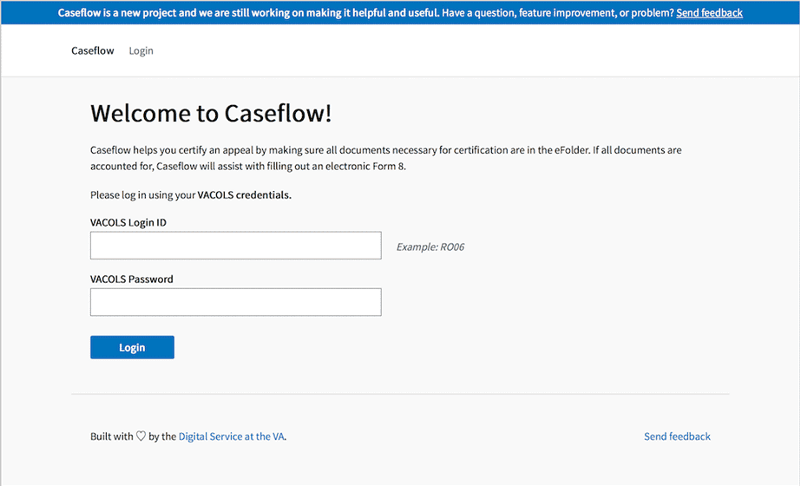 A screenshot from Caseflow.

In addition to the user-facing component, Caseflow Certification allowed the DSVA team to develop and run an important script that helps the Board identify pending appeals that may have been incorrectly categorized as paper transfers, when in fact the appeals were paperless. Without this step, the Board could be left waiting for a physical appeal to arrive at its facility when in fact none exists. Without the Caseflow Certification tool, appeals in this state could have remained unprocessed for an indefinite period. The DSVA team discovered 2,172 appeals in this state by running the script. This enabled the VA to proceed with processing these Veterans’ appeals, and to take preventative measures to avoid the problem in the future. The DSVA continues to monitor the data to detect appeals that could end up in this state again.

As of September 2016, approximately 87.3% of all paperless appeals are now certified using Caseflow. The remaining appeals are certified using the legacy process, and represent edge case scenarios. The DSVA is working to incrementally improve the Caseflow Certification tool so it can be used in more of these uncommon scenarios. Throughout the rollout, DSVA promptly responded to feedback and issues reported by VA employees.

The Process and Lessons Learned